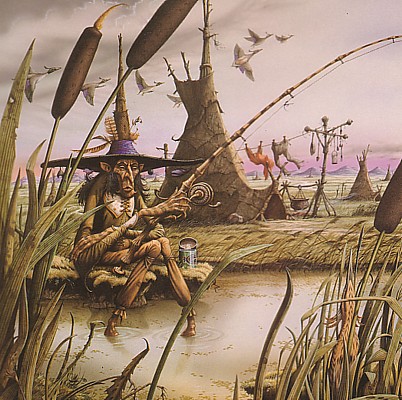 Cobb’s revelation at the end of Inception reminds me of Puddleglum’s victory over the Emerald Witch in “The Silver Chair,” book four of C.S. Lewis’ Chronicles of Narnia. I think each scene might shed light on the other.

At the climax of “The Silver Chair,” deep in an underground country, the evil queen has bewitched our heroes into believing the surface world does not exist. She pretends to have never heard of the sun, and when Prince Rilian describes it as like a lamp but larger, the witch tells thm they are dreaming things up from what they see in the room. A lion is just a dream inspired by cats, the sun by a lamp.

It is Puddleglum, Lewis’ most pessimistic character, who saves them from the witch. Maybe there is no Narnia, he says, but then our pretend world is a lot better than this real world of yours (entirely underground and occupied by monsters). He accepts that all he holds dear might be a dream, and then decides he’ll go on living as if it were real anyway. “I’m on Aslan’s side even if there is no Aslan to lead it,“ he laughs.

Then the witch turns into a huge serpent and they cut her head off. It’s awesome.

In Inception, the shade of Cobb’s wife tries again and again to convince him to stay with her, to trust her when she says the reality he clings to is just a dream. He overcomes the temptation by realizing she is too simple to be anything but a shade. He realizes that he can’t imagine her “with all your complexity, all your perfection, all your imperfection.” Though he’d like to, he can’t believe in her because she’s not quite as lovely as the real thing. The shade of Cobb’s wife stabs him but he escapes.

Like Puddleglum, Cobb overcomes the temptation to stay in a dream-world by citing the superiority of the real thing. Then, in the end, when he gets home and sees his children, he abandons his totem, before it can tell him whether or not he’s dreaming now. Again like Puddleglum, Cobb decides he wants to live as if his home is real, even if it’s not. He wants to hold his children, even if they’re shades.

Much is made of the “he isn’t safe” quote from “The Lion the Witch and the Wardrobe,” but the postmodern questions of objective truth always brings me back to Puddleglum. “I’m on Aslan’s side even if there’s no Aslan to lead it.“ It’s not the cheeriest sentiment, but it is fantastic and courageous and childish. Cobb is not fooled in the end, even if he is dreaming. He decides or learns that love always hopes, even when the object of love might be an illusion.

Movie buffs love to berate others for paying to see—and therefore perpetuating—bad Hollywood movies. “Stop going to see Transformer movies,” they prophesy, “and they will disappear.” But even if that were true, it’s not the way to... Continue →