Why They Cast Ben Affleck as Batman 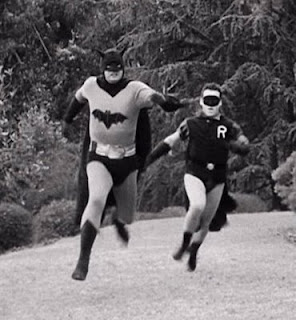 Batman’s been cast for the Man of Steel sequel, and it feels like armageddon (get it?) for the caped crusader’s cinematic streak. It’s not that I can’t see Ben Affleck as the dark knight; I can see it with jaw-clenching, sideways-smiling, Gigli clarity. But I’m not writing to complain; I’m writing to figure out why.

It’s true lots of people doubted Michael Keaton when he was cast as Batman, but no one had seen him really do dramatic work before. All they really had to go on was stuff like Beetlejuice. We’ve seen Ben Affleck as a hero, a romantic lead, and even as a spy, and none of it reveals that spark of crazy you need to get this role right.

There is a theoretical Batman movie I think Affleck could do well in: the 1930s pulp. If the film were set in pre-WWII Gotham, and Batman wore spandex instead of armor, and Bruce Wayne lunted in a fedora with Commissioner Gordon, I think Affleck could do it. I’ve said before how much I’d like that kind of movie. LA Confidential meets The Rocketeer.

But we know the world this Batman is going to occupy. Man of Steel firmly established this series in the same modern, post-9/11 world we got from Nolan. A campy Bogart Batman won’t fit there. To stand toe-to-toe with this Superman, Affleck’s Batman will have to be the militant ninja we’ve gotten used to in the last three films. With that in mind, it’s easy to predict what Affleck will do with the character. He’ll brood. He’ll clench his jaw the way he did in Armageddon and smirk sideways like in Gigli.

So why did they cast Matt Damon’s pal as Batman? Unless it’s that he recently stood on stage holding an Oscar, maybe it’s because this is a Superman sequel, not a new Batman franchise. Superman’s got to look as good as possible. Ridley Scott cast half a dozen Mr. Universes in Gladiator to make Russell Crowe look smaller. Maybe they’ve cast a bland, bro Batman to help bolster Superman as a protagonist worth rooting for. If they make the dark knight dull, the boy scout might just come off charismatic.

While reviewing Kick-Ass 2 for ebert.com—the place I used to go for the late great’s wonderful writing—Mr. Ali Arikan made some sweeping statements about superhero films that not only insulted the genre and its fans, but also undermined... Continue →